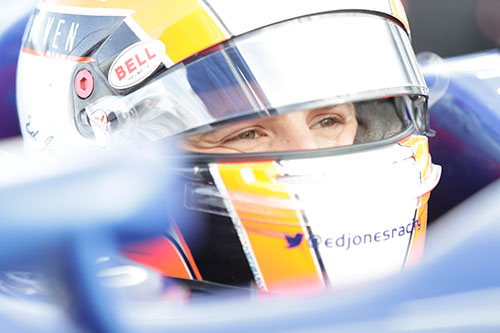 The talented Dubai, UAE-based ace lapped third-quickest in both free practice sessions on the narrow, bumpy and unforgiving Canadian street circuit, just a tenth-of-a-second adrift of the outright benchmark in the high-calibre Indy Lights field.

Much cooler conditions greeted competitors for qualifying early the next morning, and Jones secured fifth place on the starting grid behind the wheel of his 450bhp Carlin Dallara IL-15 single-seater, missing out on the second row by a scant three thousandths-of-a-second after the running was cut short by an accident involving another driver.

The 21-year-old Brit subsequently struggled for speed throughout the opening contest, initially holding station before finding himself under intensifying pressure from a gaggle of visibly faster cars and as the laps ticked down, he had his hands full trying to withstand their attack. Valiantly defending for as long as he could, Jones grittily clung on to take the chequered flag sixth and scoop a valuable haul of points.

After lining up eighth the following day, the former European F3 Open Champion swiftly advanced a couple of spots to sixth and then nabbed fifth when team-mate Félix Serrallés made a mistake at Turn Three. Unable to threaten those ahead but quick enough to pull away from his pursuers, Jones found himself in no man’s land and with two of his chief title rivals in trouble, he adopted a conservative strategy as he focussed on preserving his position.

That mature approach paid dividends, enabling the Williams-Harfield Sports Group protégé to extend his championship lead to 24 points at the end of a rare ‘off’ weekend in what has overwhelmingly been an ultra-consistent sophomore season in the fiercely-disputed Mazda Road to Indy series.

With five races left to run in 2016, Mid-Ohio Sports Car Course is next on the schedule at the end of July – the first of three consecutive road course events to conclude the campaign. Jones enjoyed a productive test there last month and is clearly eager to return to more customary territory at the sharp end of proceedings.

“Toronto is a circuit I love and a great challenge,” he reflected. “We were quick during practice, so I thought we had a good shot at pole in qualifying but the red flag cost us our opportunity and then in the races, we simply didn’t have the pace, which was both mystifying and frustrating in equal measure.

“I couldn’t get comfortable at all over the longer runs, and on both days, I was just hanging in there trying to come away with the best result I could. Saturday’s race was particularly hard work and a constant rearguard battle.

“When you’re fighting for a title like we are, it’s important to maximise your bad weekends and in light of the fact that this one fell a long way short of our usual standards, to increase our championship lead was a real result. We’re well aware that should the problem reoccur, it’s unlikely we’d be so lucky again but we’ll go away, work hard and figure it out – and then come back stronger at Mid-Ohio.”