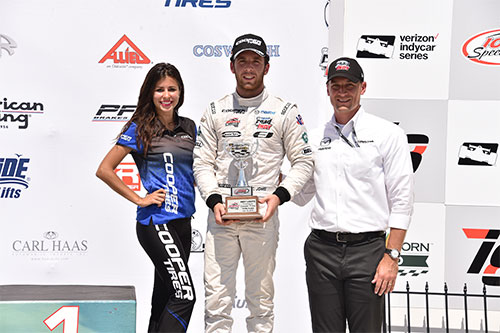 After finding himself out-of-luck a fortnight earlier at Road America, Jones headed to Iowa buoyed by a promising test behind the wheel of his 450bhp Carlin Dallara IL-15 and having snared the runner-up spoils on his debut around the short, 0.894-mile oval last year.

The talented Dubai, UAE-based ace was instantly on the front-running pace once again, lapping third-quickest in the opening free practice session and fastest of all in the next. With rain forcing the cancellation of qualifying, the field lined up for the 100-lap race in championship order – meaning Jones was on pole position.

In distinctly different conditions to the previous day, the 21-year-old Brit held station at the start and inched consistently away from his pursuers to establish a one-and-a-half-second buffer as a multi-car scrap raged in his wake. At one-third distance, however, his team-mate Félix Serrallés broke clear of that battle and began zeroing in on the sister Carlin entry, and when Jones got caught up in lapped traffic just past the halfway mark, the Puerto Rican pounced to snatch the lead.

As the former European F3 Open Champion grappled increasingly with understeer, he subsequently came under fire from a flying Zach Veach and was obliged to yield to the American ten laps later. In the closing stages, Jones was briefly threatened by chief title rival Dean Stoneman, but he responded magnificently to successfully consolidate his podium position and stretch his advantage in the chase for the coveted crown from 19 points to 23, tallying an extra marker for leading the most laps.

Impressively, in his sophomore Indy Lights season to-date, the Williams-Harfield Sports Group protégé has outscored all of his high-calibre adversaries on ovals – no mean feat for a driver who grew up competing in Europe – and next he will be keen to further prove his versatility as the series moves swiftly on to the unforgiving Streets of Toronto for an altogether different type of challenge.

“Iowa Speedway is the shortest lap on the calendar, which really tests your concentration as it’s easy to lapse into autopilot mode and you come across backmarkers far more frequently than you would elsewhere,” Jones explained. “It’s a lot of fun to drive, and with Carlin having taken a one-two last year, we returned with high hopes and in positive mood.

“We had an encouraging test there in the build-up to the weekend and maintained that strong form throughout practice. I was looking forward to qualifying so it was a shame it got abandoned due to the rain, although in situations like that, leading the championship obviously pays off. In any case, I was confident we had a car that was quick enough for the front row of the grid and I knew we would be in with a solid shout.

“The track changed quite a lot before the race, and we went fairly conservative on the set-up to be on the safe side in the cooler and windier conditions. I got a great start and felt comfortable as I built up an early margin, but when I came up to lapped traffic, I found myself lacking front-end grip and fighting understeer.

“That was ultimately what allowed Félix and Zach to squeeze past, which was undeniably frustrating, but I knew Dean was behind me so I still managed to extend my championship lead. Now we’re already focussed on Toronto; I struggled a bit there last year, but with more experience under my belt 12 months on, it should be a completely different story this time around. We’re continuing to work towards the bigger picture, and with that in mind, two more podiums are firmly the goal.”